Paul Henry Carr, the valiant gunner’s mate of the DE 413 killed in the Battle off Samar, was posthumously recognized in Oklahoma for his heroism in the line of duty. February 26, 1983, was declared by the governor to be Paul Henry Carr Day. Carr’s heroism would be recognized by the Navy, as well, as the USS Carr (FFG 52) was launched that same day. Carr also received the silver star medal for his fortitude in the line of duty. 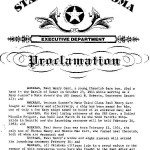