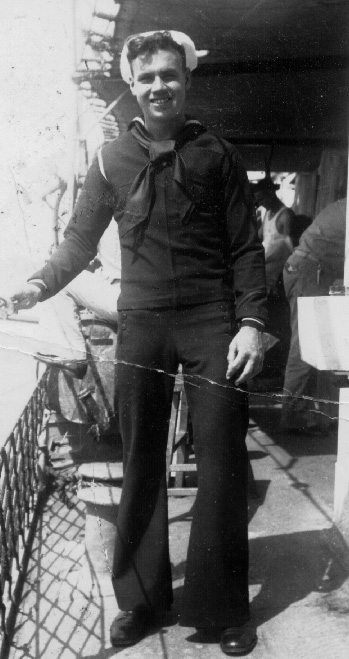 Patti Anne Johnson, Jack’s granddaughter, described this picture in a letter to Dick Rohde in June 1999:

I thought I’d send this photo of my grandfather along so you can see who I am talking about. This photo was taken around 1936, his first time around in the Navy. I may be wrong, but I believe this was taken during his trip to China. His ship spent some two years in China and he has a full scrapbook of photos taken during that time. I have only seen it once, my grandmother treasures it and we aren’t really allowed to look at it. But last week I was given special permission to see it. He is around 18 or 19 here.

In 1944 he was about 27, an “old” man I’m sure. My grandpa gave this photo to my mother and she carried it around in her wallet for about 30 years. About two or so years ago she gave it to me. It is the only actual photo I have. I do have another photo of him taken just before he left for the war…. I don’t have that photo, but my mother has a copy of it. My grandmother let me take it for two hours a few months ago to scan it into our computer and my husband printed out a copy for my mom as a gift.

Some photographer in town offered free photos to all the men going off to war, so my grandparents went down and got one of him and one of the two together. They couldn’t afford to buy prints, so there is only one of each. I’ll send a copy along soon.

I looked up the Gismo, and was pleasantly surprised to see my grandpa listed- one of the fellows who went along with “Sea Daddy” Harrington to get a tattoo- he is referred to in the piece as “China” Conway. A probable reference to the above-mentioned China trip. It is in the third Gismo. My mom has a photo of her dad when he got older and he has a short-sleeve shirt on and a big Navy anchor on his bicep- guess Iknow where he got that from now!