Friend Bob Cox, creator of the bosamar.com website, announces that the 5th edition of his “The Battle Off Samar – Taffy III at Leyte Gulf book is available for purchase.  The book is available in both soft and hardcover, xviii + 268 (292 total pages) and electronic PDF format.

is here to educate the world about the Battle Off Samar and what Taffy III did at Leyte Gulf. I could not have chosen a better topic or a better group of veterans to honor and pay tribute to. Thanks for stopping by, God Bless, and happy web surfing!

Terrific illustrations of the Sammy B by hobbyist Jean Secardin. Click to enlarge. 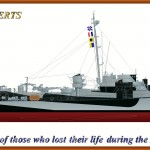 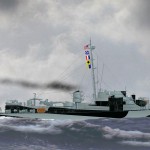 DE-413 at sea by Jean Secardin

Jean indicates the flags are on navsource and are Flag Hoist / Radio Call Sign: N – T – I – K

The following is presumed to be the official Navy information release about the ROBERTS, prepared soon after the ship was sunk.

Several direct hits by 8 and 14-inch salvos, scored by heavy Japanese ships, sunk the USS SAMUEL B. ROBERTS (DE 413) in the Battle for Leyte Gulf off Samar Island, bringing to an end her valiant slugfest with enemy vessels of superior power.

The ROBERTS dodged torpedoes, and threw punches of her own for fully 50 minutes before the superior numbers and armament of the enemy vessels sent her to the bottom on October 25, 1944.

The destroyer escort was part of a screening unit to protect a force of American aircraft carriers. When the enemy opened fire at 7 o’clock that morning, the ROBERTS immediately sought to protect her “flattops.” The first step was to lay a smoke screen and then, steaming under cover of her own screen, the ROBERTS approached within 4,000 yards of a Jap heavy cruiser, fired three torpedoes, and returned to the protection of the smoke. One of the torpedoes struck home and started fires in the enemy ship.

Keeping between the main enemy force and her own carriers, the ROBERTS settled back and turned all guns on a Japanese cruiser. One 5-inch gun fired more than 300 rounds of ammunition, all that was available, in 50 furious minutes, scoring at least 40 sure hits.

The rapid fire from this gun was halted when a Jap battleship found the range and blasted the gun out of action with a 14-inch s Six charges were rammed in by hand and fired, although the men knew that an explosion might result from each of them because the gas ejection system was not working.

The seventh round fired in this manner exploded and killed all but three members of the gun crew outright. The gun captain, Paul Henry Carr, Gunner’s Mate, Third Class, who was credited generously for the excellent performance there was wounded beside his mount, clutching the last 5-inch shell and struggling to ram the 50-pound projectile into the chamber. Upon the recommendation of his Commanding Officer, Carr was on March 1, 1945 awarded the Navy Cross posthumously.

In the next few minutes, the Japs kept sending successive salvos of major caliber projectiles into the foundering destroyer escort. The death blow was a three-gun battleship 14-inch salvo that hit in number 2 engine room, tearing a hole 40-feet long and 10-feet wide in the ship’s skin on the port side. Abandon ship was ordered.

Men abandoning the vessel to port launched a life raft on that side, but a breeze blew it into the gaping hole torn by the last salvo. Four men crawled into the aperture, embarked upon the raft, and with every ounce of strength at their command, pushed the raft against the tide of inrushing water and managed to get it outside of the rupture.

This was an important victory because the 120 men that survived had only two other rafts and two floater nets on which to cling until rescue was effected some 50 hours later.

The long ordeal at sea was marked by shark attacks and lack of water. Eighteen hours were spent in heavy, oil-covered waters and each man became so saturated with the sticky substance, that he was indistinguishable from the others. One individualist removed some oil-smeared clothes in order to ease his swimming but in so doing exposed the lower portion of his body which was still white, not being covered with oil. A shark was attracted, swam up to the naked survivor, and nudged the exposed portion. The man put his oily clothes back on with haste.

A PC (Patrol Craft), escorting a group of five LCI’s, came upon the group at the start of their third day. The ship’s commanding officer, fearing that some of the men might be dynamite-laden Jap suicide swimmers purposely smeared with oil, approached the survivors with guns manned and ready. He put them to a test by yelling, “Who won the World Series?” “The St. Louis Cardinals” the answer shot back.

The ROBERTS’ life lasted only six months. Built by the Brown Shipbuilding Company, Houston, Texas, the ship was commissioned on April 28, 1944. Lieutenant Commander R. W. Copeland, USNR, who had charge of the ship when it dodged shells at Samar, was the vessel’s commanding officer.

Mrs. Samuel B. Roberts, mother of the ship’s namesake, Samuel B. Roberts, Jr., Coxswain, USNR sponsored the vessel. Coxswain Roberts was awarded the Navy Cross for extraordinary heroism while serving on the crew of a landing craft that rescued stranded Marines from Guadalcanal under intense enemy fire.

The Gismo was the ship’s newsletter. Captain Copeland described its creation in the following manner:

One of the little things that helped break the everyday routine of watch standing and ship’s work was our ship’s newspaper. It didn’t just happen nor was it exactly inspirational. I have told you that when we left Boston en route to the Pacific the Commodore had our division doctor, Dr. Erwin, come aboard to ride with us at least as far as Pearl Harbor. Fortunately, we had very little illness on board and this unfortunately, as far as Doc was concerned, gave him practically nothing to do.

After about a week or ten days of sheer boredom, Doc came to my cabin one afternoon and wondered if there wasn’t something he could do to relieve his own monotony and at the same time do the ship and the crew some good. Both of us knitted our brews and cudgeled our brains for quite a while. After discarding several other ideas I finally asked him how he would like to get out a ship’ s newspaper– something on the lighter side to stimulate the interest of the crew in their shipmates and shipboard happenings.

Doc was a little skeptical at first, but considering anything preferable to twiddling his thumbs, he embarked upon the idea with a great deal of enthusiasm. For his initial staff he enlisted the help of Cronin, our yeoman second class, who in civilian life had done some newspaper work, and also obtained the services of Chuck Raymur, one of our radiomen, as the ship’s cartoonist. By the time the paper was first ready to go to press Doc was around again wondering what we should call it. Several high class names containing the words “Herald” and “Chronicle” or something like that were suggested, but none of them seemed appropriate.

Finally Doc said, “Well, I just don’t know what to call it,” which caused me to reply, “Well, Doc, any time we don’t know the name of anything we usually call it a ‘gismo’.” When the first issue came out, that was the name it bore. I guess there never was a newspaper published anywhere that didn’t run a contest of some kind or other, so the editorial staff of the “Gismo” decided it was high time to run a contest to get a permanent name for our paper. At least forty entries were submitted. I don’t remember who all of the judges were, but Ensign Moylan was one of them.

The last night before the contest closed, sometime after midnight, I had an inspiration. I took a piece of paper and a soft lead pencil and painstakingly, with my left hand, wrote out a contest letter suggesting the reasons why I thought the name “Gismo” should be retained. I then signed it “Sammy B”, went up on the fo’c’sle, picked up little Sammy, who was sleeping behind the hedgehog, took him down to the deserted yeoman’s office and, with the aid of a stamp pad, put one of his paw prints below the signature.

Of course, the prize money could never be awarded but the judges finally decided that Sammy’s letter was the winner. Although I think more than one or two of the crew suspected that I had written Sammy’s letter, no one was indiscreet enough to openly accuse me of it, and the name “Gismo” stuck with our paper from then on.

“What happened to the ‘Gismo’ when Dr. Erwin left the ROBERTS?”

Ensign Moylan carried on as editor. Except for the first issue which came as a surprise to the men, the publication was the crew’s own project. Each division selected a representative who became a member of the editorial staff. How much good the “Gismo” did will never be known, but one thing is certain–its articles and poems and cartoons brought a lot of chuckles to most of our crew who only by its disclosures found out how interesting the lives and the habits of some of their shipmates really were.

from “The Spirit of the Sammy-B”

Editions of the Gismo

This 120-page first hand account of the Battle of Leyte Gulf is available in soft cover  directly from lulu.com. Cost is only $9.96 plus shipping.

The “Spirit of the Sammy B” is Captain Copeland’s  thoroughly readable autobiographical account of the DE-413’s short but valiant history.  A must read for any one interested in the Samuel B. Roberts or the Battle off Samar.