Photos from the Dedication 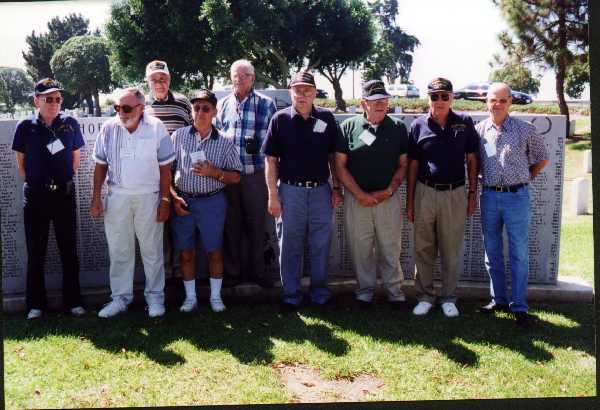 Congressman Stearns responded to the Association’s appeal, and sent a letter to William Tuerk of the Department of Veteran Affairs.

Stearns to Tuerk page 1 of 2

An appeal to the Congressman to help with placement of the bronze plaque at the Fort Rosencrans Cemetery.

Letter to Cong. Stearns is here.

William Tuerk responded to the Association in the negative. Dick Rohde indicates:

a. It is my understanding that Mr. Rinker knew that the monument represented the three ships.

b. There are not three ship’s associations, only two. SBR Survivors Association and Johnston/Hoel Association.

c We already have a space at the cemetery for the bronze plaque, on the existing monument.

d. I am not aware of a “Johnston/Hoel/Roberts Monument Committee”.

Click on the image below to see the letter. 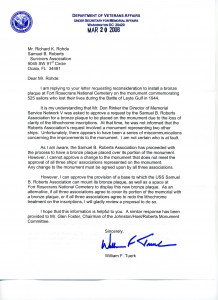 Text of the letter follows.

I am writing on behalf of the Samuel B. Roberts Survivors Association. The USS SAMUEL B. ROBERTS, DE 413 was a part of Task Unit 77.4.3 known as Taffy 3, involved in the battle of Leyte Gulf in October of 1944. It, together with USS HOEL, DD 533 and USS JOHNSTON, DD 557, were sunk by shellfire from the Japanese fleet in that battle. The efforts of Taffy 3 resulted in the saving of the Philippine invasion and our being awarded the Presidential Unit Citation.

A granite monument honoring our shipmates who died in that battle was dedicated at Fort Rosecrans National Cemetery in San Diego in 1995. This letter is in response to information we have received regarding a ruling you recently made concerning our monument.

Several granite monuments were erected honoring those Taffy 3 sailors who perished in the battle. Through time, the monuments deteriorated to the point the names were difficult, if not impossible, to read. Other ships installed bronze plaques over their existing monuments to resolve that problem. We, the Samuel B. Roberts Survivors Association, decided to rectify that problem in the same manner. We solicited funds from our membership and friends, including family members of those killed, toward that end.

We then decided to look elsewhere for a way to honor our lost comrades, in a manner so that their names would not fade away. We found that the Nimitz Museum, also known as the Museum of the Pacific in Fredericksburg, Texas, was willing, for consideration, to name a pavilion and gazebo after our ship. We decided to go ahead with that project.

Just before we formally agreed to the Texas project, I contacted the cemetery in San Diego to make certain it was maintaining its position of denying our request to improve the monument in San Diego, since that was the original basis for our fund raising project. I spoke with the Interim Director, Charles Kahler, as Mr. Livingston was then away on a special assignment. I explained the situation to Mr. Kahler. He was familiar with our monument. He said he thought adding the bronze plaque was a good idea but he would have to talk with his supervisor, Don Rinker. Mr. Kahler thought, as we did, that once the Johnston/Hoel people saw our bronze plaque they would be inclined to do the same. I was then informed by Mr. Kahler that he had spoken with Mr. Rinker and Mr. Rinker had approved the project. I told him I would need something in writing before I committed our Association to an expense of almost $10,000. Mr. Kahler then emailed me a copy of Mr. Rinker’s email which approved of the project, and told me to “go ahead”. Based on that approval, we proceeded.

It is my understanding that Glen Foster, a member of the Johnston/Hoel Association, objected to the installation. Mr. Foster apparently stated he was the chairman of the USS JOHNSTON-USS HOEL-USS SB ROBERTS monument committee. He may have been the chairman of a committee during the planning stages, but I do not know that to be a fact. In any event, the memorial was completed and then turned over to Fort Rosecrans National Cemetery. If this committee still exists, there has never been a meeting to which any members of the Samuel B. Roberts Survivors Association have been invited or attended. Indeed, we are unaware of any reason for the continuance of this supposed committee since the memorial has been deeded over to the cemetery.

As you might suspect, we, the Samuel B. Roberts Association, are quite upset with your decision about the monument. We do not understand why we were not consulted about this matter. Officials of Fort Rosecrans National Cemetery were well aware of our existence and our interest in the bronze plaque. We do not understand why we would be provided with verbal and written authority to go forward with the project and then, after we relied on that authority, are being told the plaque we purchased cannot be used. We want the bronze plaque on the monument to preserve the names of our fallen shipmates.

We earnestly and respectfully request you reconsider your decision in this matter. Not only have we expended considerable funds based on approval from officials of the National Cemetery Association, but also have planned a reunion in San Diego in October of 2008 to rededicate the memorial with the new bronze name plate for our fallen shipmates. We fully respect the right of our sister ships, USS HOEL and USS JOHNSTON, to decide not to improve their portion of the monument but do not feel they should be able to deny us our right to improve our portion. We do not believe it is appropriate that one person, claiming to be chairman of a non-existent committee, should be able to thwart our desire to preserve the names of our fallen shipmates.

Our first hope, of course, is that in reconsidering your decision, you will allow us to install the bronze plaque. Please allow us, in the short time we have remaining on this earth, to honor our fallen shipmates in a way that will allow their names to remain after we are no longer here. If you are unwilling to grant us this request, we would expect you would reimburse us the $9,143.14 we spent in reliance on the cemetery’s telling us we could have the bronze plaque installed on the existing monument.

We look forward to hearing back from you in this matter. Thank you in advance for your consideration.

Richard K. Rohde, for the Samuel B. Roberts Survivors Association